Programme archive - 8. edycja
retrospective: Theo Angelopoulos
Alexander the Great Athens, Return to the Acropolis Days of ‘36 Eternity and a Day Landscape in the Mist Reconstruction The Bee-keeper The Broadcast The Hunters The Suspended Step of the Stork The Travelling Players Trilogy: The Weeping Meadow Ulysse's Gaze Voyage to Cythera
Section index
Tweet

Athens, Return to the Acropolis

The film was made for an Italian producer and it formed a part of an international project about the cultural heritage of contemporary Europe. Athens, Return to the Acropolis (Athina, epistrofi stin Akropoli) is a poetic vision of the capital city of Greece, where history and monuments are mixed with the current-day and civilisational problems of large cities. In several scenes Angelopoulos describes the life in Athens, portrays crowds of tourists climbing the Acropolis, showing new sites of archaeological research, but also looks at the city's inhabitants doing their everyday activities. In addition, he talks about the history of Athens, about the city's founders, its glory and about its tragedies as well: Turkish occupation, German occupation and the civil war of the 1940s. 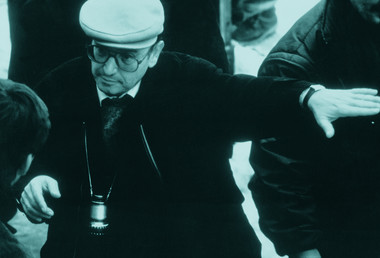 Theo (Theodoros) Angelopoulos was born on 17 th April, 1935 in Athens. His childhood and youth coincided with the most dramatic period of history of modern Greece, marked with the rule of the rightist dictator Ioannis Metaxas, German and Italian occupation and especially with the bloody civil war. These events, as well as the regime of the Colonels at the end of the 1960s and beginning of the 1970s often formed the background of Angelopoulos’s later works. He studied law at the University in Athens but gave up writing his masters thesis, quit University one year before graduation and waived his plan to take over his uncle’s legal office. During his studies he fell in love with cinema and decided to move to Paris to study at the IDHEC film school. Before doing so, he spent two years in the military, travelling with his units across small villages in Epirus and Macedonia, which in the years to come became decisive for the scenery of the majority of his films.

In the early 1960s Angelopoulos went to Paris. There, he studied anthropology at the Sorbonne and attended lectures by Claude Lévi Strauss at the College de France. He worked as an usher in the famous Cinémateque Française for Henri Langlois and learned filming skills from the creator of cinéma vérité, Jean Rouch. Angelopoulos’s artistic concept was also influenced by experiments he saw in France: by Jean-Luc Godard and Michelangelo Antonioni, whom he later admired very much. Although Angelopoulos went to Paris precisely in order to study at IDHEC, he attended the film school only for two semesters and after that he was expelled by its management for insubordination.

The future director brought this newly-gained experience to the contesting and rebellious Athens. He wrote film reviews for leftist magazines and prepared to make the film Forminx Story, which he never actually finished. Just before the Colonels seized power, he managed to shoot the para-documentary Broadcast and in 1970 he made his feature-length debut Reconstruction. Despite its low budget and unfavourable opinion of the censors, the film was an important event of the festival in Thessaloniki. A lot of emotions were aroused also by Days of 36 (Meres tou '36), a parable of rightist juntas and at the same time a pastiche of political sensational spectacles, so popular in the cinema of that time.

Angelopoulos triumphed with his Travelling Players, a chronicle of the modern history of Greece, lasting several hours and shot from the perspective of an actors’ troupe, travelling across Epirus and Macedonia. The film was received enthusiastically at the festival in Cannes, although it was screened outside the main competition there. The Hunters, made three years later, is the most hermetic and artistically uncompromising film by Angelopoulos and closed the first trilogy in his carrier (the historical one). In 1980 the audience saw his Alexander the Great, a story about the semi-legendary leader of a small country established at the beginning of 20 th century in the mountainous northern Greece. Angelopoulos showed there a shrewd analysis of power, transforming from idealism into a bloody dictatorship.

The film was not a financial success and the director changed the character of his films. Since then, Angelopoulos has avoided historical and philosophical analyses, choosing existential reflections. This change of style was also the outcome of inviting Tonino Guerra to work together. In Angelopoulos’s crew important roles were also played by: cinematographer Giorgos Arvanitis, composer Eleni Karaindrou and stage-designer Mikes Karapiperis.

In the 1980s, together they created the so-called Trilogy of Silence. Landscape in the Mist, which was part of this trilogy, was an international success and brought to the director numerous prestigious awards, including the Félix Award for the best European film in 1988. Later, Angelopoulos made The Suspended Step of the Stork, starring Marcello Mastroianni and Jeanne Moreau, and Ulysses’ Gaze starring Harvey Keitel. The former showed the sufferings of emigrants and refugees and the latter was a moving analysis of Balkan conflicts, crowned with the description of Sarajevo under siege. Also the melancholic Eternity and a Day was a success for the director with it winning a Golden Palm at the Cannes festival. Currently, Angelopoulos is working on another trilogy. Part of it, entitled The Weeping Meadow has already had its world premiere.

Theo Angelopoulos – poetry of an image

2004 Trilogia I: To Livadi pou dakryzei / Trilogy: The Weeping Meadow 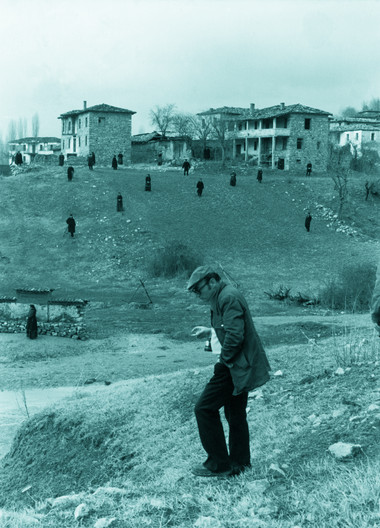