Aesthetics is the result of limitations. Interview with Mark Jenkin

Descriptions like 'unique' or 'one-of-a-kind' get thrown around a lot at festivals, but one film that earns either moniker, and then some, is Mark Jenkin's Bait, the laureate of this year's Grand Prix and the winner of the Audience Award. Shot on location in Charlestown and Penzance, Cornwall, on the English coast, with a 1970s wind-up Bolex 16mm camera, black and white film and an astonishing post-synced soundscape, Bait tells of the escalating conflicts between a local fisherman and the out-of-towners who've moved into his family home, renting it out for the summer as an AirBnB. Steeped in local specificity, the film has been garnering huge success at various festivals since its premiere at Berlin back in February. We sat down with director Mark Jenkin for a chat about the film's development, and his artisan approach to shooting and processing celluloid.

So Bait was twenty years in the making, is that right?

Yeah, sort of. It was twenty years ago this August that I came up with the idea for it. I pitched this idea for a film called The Holiday Park, and the basic theme has stayed in Bait, but it's a very different film from the one back in 1999. It's been through various incarnations since.

What was the film originally about?

The original film was about a fisherman who's making a video diary. He borrowed a video camera to make a film about his life, because he's had a fling with a rich holidaymaker who he then found out was having a baby. He'd already written himself out of their life, as he was in Cornwall, but he wanted to make a little film about his life in this Cornish village as a letter to his child. As soon as he got his camera out to record his way of life, he realised that his way of life didn't exist any more, and the camera became a catalyst for everyone who had an opinion about something. It was kind of like a found-footage film, this unedited video tape of a descent into civil war.

It's interesting that even there, the form was the driving force of the film.

Yeah, always. The form and the content are just so intertwined that they can't be separated. When they are separated, or they're not intertwined from the start, that's when we get such tedious narrative cinema, where there's so much attention given to the script - which there should be - but it's separate to the form, which is the last thing that's thought about. 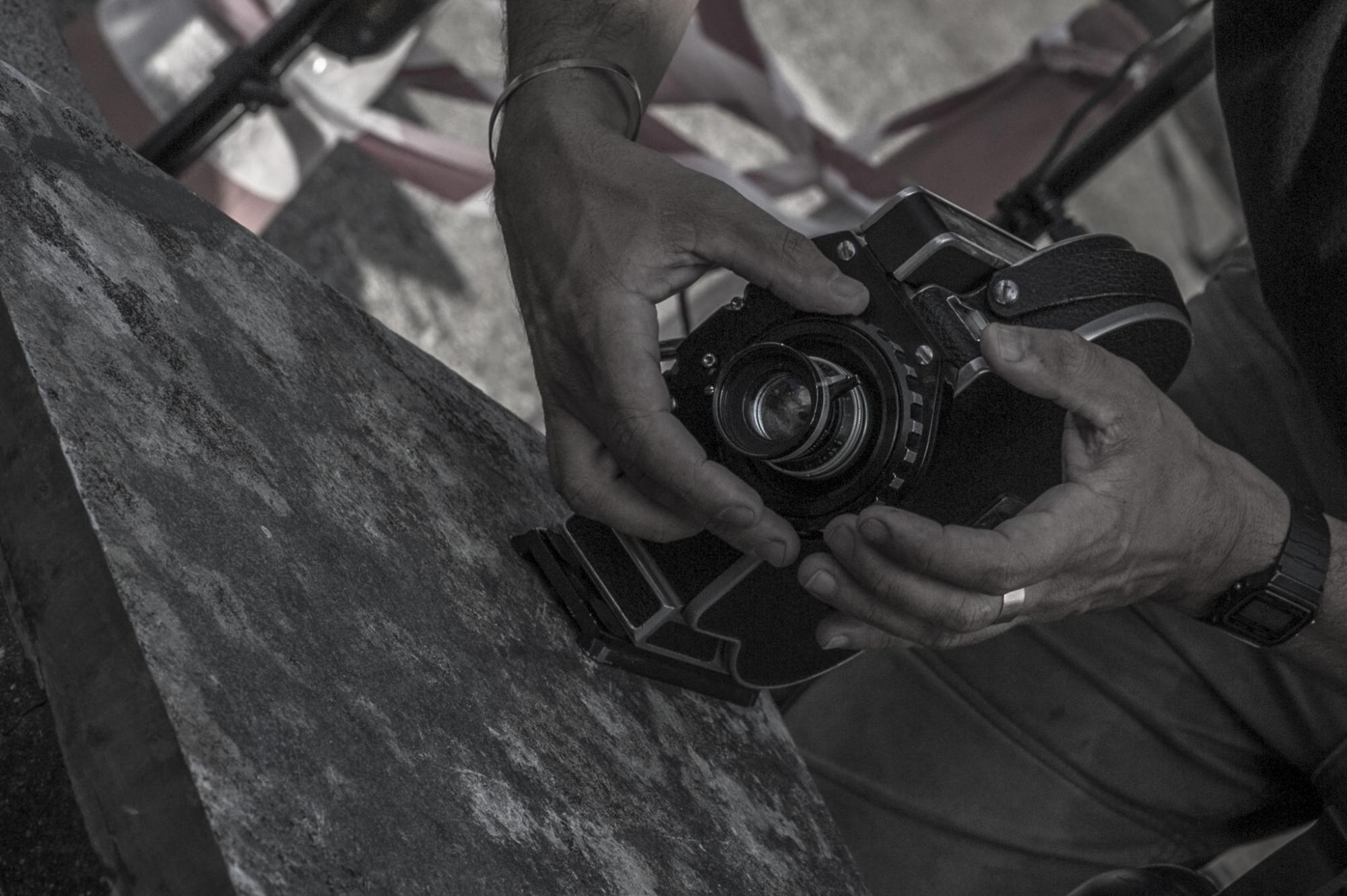 When did the switch from video to film come about?

I'd consistently shot short films on film, and I'd got to the stage where I though I wanted to do something a bit longer on film, so I did a film called Bronco's House in 2015, which was a 45 minute, mid-length film, shot on a Bolex and post-synced, exactly the same way I did with Bait. I went back to the original idea, which by this point was called Shooting the String, and by then it was becoming out-of-date. The idea that someone could take out a video camera and it would attract people's attention didn't work, because suddenly everyone had a smartphone. The found-footage thing had also been done so much, it felt like it needed a new injection of something. Because it was a video diary film, it was wall-to-wall dialogue, and the way that I work with film, post-syncing it, wall-to-wall dialogue is the worst starting point for me. It seemed like the least obvious film for me to do in the new formal way I was working, but I liked that, so I looked at it and thought, 'What do I need to change to make this work?' Shooting on film, the form became less a part of the narrative, but just as important to the world of the film.

Along with the technological changes, a lot has changed - both locally and nationally - on a political level too.

Twenty years ago I thought I was making a film about a very specific part of Cornwall, about how alienation manifests itself in different, destructive ways. It was relevant to that part of north Cornwall, because each summer you'd have these stories in the national papers about affluent, young incomers running riot and causing trouble with the locals. Now, without really changing it, it's become something much more universal. When we went to Berlin, a lot of people interpreted it as a Brexit movie. In fact, it was called a Brexit movie in several early reviews. Partly because there's a radio playing in one of the scenes that's talking about Brexit. For me that was just background noise - that family would have Radio 4 on, and Radio 4 would be discussing Brexit - and it wasn't meant as a comment on anything besides, 'This is where we are.' In Germany, they subtitled that radio report, so all that came to the foreground. At the first Q&A, at the world premiere, it was like I'd become the unofficial spokesman for Brexit.

You worked fast with a small crew, while shooting on film. Is the notion that film is prohibitively expensive for young filmmakers a myth in your experience?

I'd always shot Super 8, which was designed to be shot by one person, like the equivalent of the iPhone today - convenient, easy to use, difficult to get it wrong.

I basically took that ethos and applied it to 16mm, using a 1970s Bolex that was designed to be used by one person, a bit like a home movie camera. So it doesn't need a lot of people to work it, and I don't shoot any sound, so it's a bit like a photographic shoot.

What about the light?

I worked with a brilliant guy called Colin Holt, and he lit everything with three lights, so it was basically three-point lighting for pretty much everything, and he just works wonders within that limitation. I love the idea of limiting myself, working out exactly what you cannot do, and within the space of what you can do, have complete freedom. The approach to lighting is the same as the approach to camera. We've got a tripod and a camera. The camera doesn't move. The opening shot is a moving shot, but that's me laying on the roof of a car, rolling down a hill. It's always simple, so it's always quick. If we can't do a complicated lighting set-up to light a wide shot, then we just move the camera in closer to the subject. All of the aesthetic qualities are borne out of the limitations. The idea that it's expensive is a complete fallacy. I don't hire any kit. The camera is a top of the range Bolex that cost me under £400. I shoot everything on one lens, and we're supported by Kodak now, so they give us good deals on the stock. I hand process everything, so there's no lab fee.

I shoot one take of everything and one safety, which is a brilliant limitation because it means post-production is quicker. I don't mean to do down digital, but you have to spend a hell of a lot of money before digital is free - to hire or buy the cameras - but then it becomes incredibly time expensive. If you hoover up everything and shoot the shit out of every single scene, then you're in an edit suite for ever. We had 4.5 hours of rushes in total. The day I got the rushes back after the digital scale had been done, I watched all of the rushes twice in a single day, and in my head I'd edited the film. I could have had 30-50 hours of shit to go through. I don't shoot coverage. I just think of the fragments of what the films's going to be, and I shoot them. Sometimes they cut together as I'd imagined, other time they don't and I have to think how to make it work with the shots I have.

Tell us about your experiments in processing the film.

Well, my last film, Bronco's House was all processed in an instant coffee-based developer. It was the first time I'd done a huge amount of processing, so I didn't want to pour loads of chemicals down the sink. I live above a harbour, with the second biggest fishing fleet in the UK, so I didn't want to be pouring poison into the drain that comes out in the harbour, while making a film about the fishing industry. So I used this coffee-based developer, speaking to people who'd done it before and refined a recipe. I found my own special brand, Maxwell House from Poundland, tweaked it a bit to get the look I wanted. On this one I just used a normal photographic developer that was safe to flush away.