Werner Nekes was born in 1944 in Erfurt and studied linguistics and psychology in Freiburg. He then went to Bonn in 1964 where he was a head of the University Film Club and later chairman of the FIAG. He developed friendships with film directors, sculptors and painters. These included Dore 0., his companion and collaborator since 1967. He began painting in 1965 with diverse materials and objects. He started his practice of film with 8mm and went on with 16mm. He decided to free the film from narration and psychology and organized his films according to temporal units and structural systems.

German avant-garde film producer and collector. Nekes was born in Erfurt, in 1944, and attended school in Oberhausen and Mülheim an der Ruhr. In 1963, he enrolled in psychology and linguistics studies at Freiburg. A year later, he moved to Bonn where his interest in cinema grew and where he became increasingly involved in the university film club, later becoming its chairman. His artistic career began to bloom during the following years under the influence of his friendships with various performers and filmmakers, including the film director, painter and photographer Dore O. (full name: Oberloskamp) who became Nekes’ collaborator and, eventually, his wife. In 1965, Nekes began producing collages and various other artistic objects. His passion for film developed more fully when he began to shoot films with a 8mm camera, later experimenting with 16mm and different film stocks to test the possibilities of the medium. In spring 1967, the Kurzfilmtage (International Short Film Festival) in Oberhausen rejected his submissions. Rather than give up on showing his creations, the young filmmaker organized his own counter-event. At the end of the year, Nekes and Dore O. moved to Hamburg.

In Hamburg, Nekes co-founded the magazine ‘Filmmacher Cooperative’ and became one of the organisers of the Hamburger Filmschau Film Festival. In addition, with Dore O., Nekes held filmmakers’ meetings and film screenings in his flat at Brüderstraße 5 and became part of Hamburg’s ‘Prokinoff’ film directors’ circle. By this time, Nekes was already widely recognised as an important experimental filmmaker and he travelled around the world to show retrospectives of his work and to lead film seminars. By 1971, at the age of 27, he was already a lecturer at Hochschule für Bildende Künste in Hamburg. In 1978 he returned to Mülheim an der Ruhr with his wife, where he has been residing to this day. Since the 1980s, Werner Nekes has taught at schools in Wuppertal, Offenbach, Cologne and Hamburg. His movies continue to draw audiences at world festivals and he has received awards for the short films put-putt, jüm-jüm and Beuys, as well as for his feature film Uliisses. Nekes’ second calling has been his long-standing interest in pre-cinematographic visual effect techniques, which has resulted in his extensive collection of optical artefacts from history, including magic lantern slides, a camera obscura, a peepshow booth, a thaumatrope (a Victorian toy that gives the impression of combining various images drawn on spinning disks) and various shadow play devices. Nekes’ collecting pursuits have in turn come to inspire his film work. In the Media Magica documentary series, the director used objects from his collection to illustrate the long history of the various optical illusions and moving pictures that eventually gave birth to modern cinematography. Nekes has frequently made his collection available to the public at numerous exhibitions worldwide, including in Tokyo, Budapest, Bremen, Los Angeles, Cologne, Graz, London, Salzburg, Hamburg, Vienna, Monaco, Melbourne and Paris. 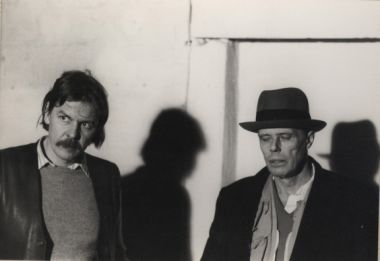