Dusan Makavejev is the premier figure in Yugoslavian film history; his films are deeply rooted in his nation's painful postwar experiences and draw on important Yugoslavian cinematic and cultural models. Makavejev's work has violated many political and sexual taboos and invited censorship in dozens of nations.

Film index of the section Retrospective: Dušan Makavejev
The Seal Anthony’s Broken Mirror Colors Are Dreaming Don’t Believe in Monuments Beekeeper’s Scrapbook Damned Holiday What Is a Workers’ Council? Educational Fairy Tale One Potato, Two Potato Smile ’61 Miss Beauty ’62 Parade Down with the Fences New Domestic Animal Man Is Not a Bird Love Affair, or the Case of the Missing Switchboard Operator Innocence Unprotected I Miss Sonia Henie WR: Mysteries of the Organism Sweet Movie Montenegro – Or Pigs and Pearls The Coca-Cola Kid Manifesto Gorilla Bathes at Noon A Hole in the Soul Section index

In the 1950s, after studying psychology at Belgrade University, Makavejev became involved in the activities of various film societies and festivals and studied direction at the Academy for Radio, Television and Film. As early as 1953, he began making short films and documentaries and would work in various capacities at both the Zagreb and Avala studios during the late 50s and early 60s. The documentary impulse remains powerful in Makavejev's work, as does the tendency to intercut undigested segments from other films into longer works.

Makavejev enjoyed great critical success with his first three features, Man Is Not a Bird (1965), Love Affair (1967) and Innocence Unprotected (1968). Highly allegorical and relying on techniques derived from Brecht and influenced by Godard, these films were sardonic and anarchistic views of Eastern European state socialist milieus.

Much of Makavejev's work has been uncompromisingly experimental as well as politically outrageous; W.R.: Mysteries of the Organism (1971) is the best example of this combination and is the director's most influential work to date. Much of the film is composed of a documentary Makavejev researched in the late 1960s while in the US on a Ford Foundation grant and which was eventually financed by German TV. A witty, passionate, and often rambling account of pioneering psychoanalyst Wilhelm Reich and his American disciples, the material is intercut with a fictitious political-sexual allegory set in contemporary Belgrade. The film was instantly banned in Yugoslavia and made Makavejev persona non grata in his native country until the late 1980s.

Sweet Movie (1974) was made in Canadian exile, with some production resources furnished by the National Film Board of Canada. Also a disjointed, two-part narrative, it again focuses on radical techniques in sexual psychotherapy, here played out rather than verbalized. Intertwined is yet another acidic, allegorical fable of the decay of Yugoslavia's socialist legacy. Extremely violent and sexually explicit, Sweet Movie was dismissed (and censored) as pornography in many countries, and added to Makavejev's reputation as a "filmmaker maudit."

Montenegro (1981) has been Makavejev's greatest financial success to date. Political commentary and formal experimentation are subordinated to narrative drive in this story of a housewife (Susan Anspach) who grapples with sexual liberation and fails.

Makavejev's long exile from his homeland ended in 1988 with the release of Manifesto, a Ruritanian political farce mostly shot in Yugoslavia. Although the film marks the most disciplined, traditional storytelling of Makavejev's career, it has seen only limited bookings in the US. Also little seen was his follow-up Gorilla Bathes at Noon (1993), a political comedy based on the adventures of a Russian soldier as he wanders around Berlin. 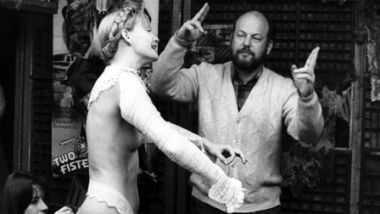 1965 Człowiek nie jest ptakiem / Man is Not a Bird

Our Partner of Makavejev retrospective is the Austrian Film Museum, Vienna.