During a family breakfast, two women, seemingly mother and daughter, eat croissants with jam, drink coffee while the plays in the background. They suddenly begin to strip. The change of clothes is enough to flesh out the convention of social roles and the meetings we assign them. 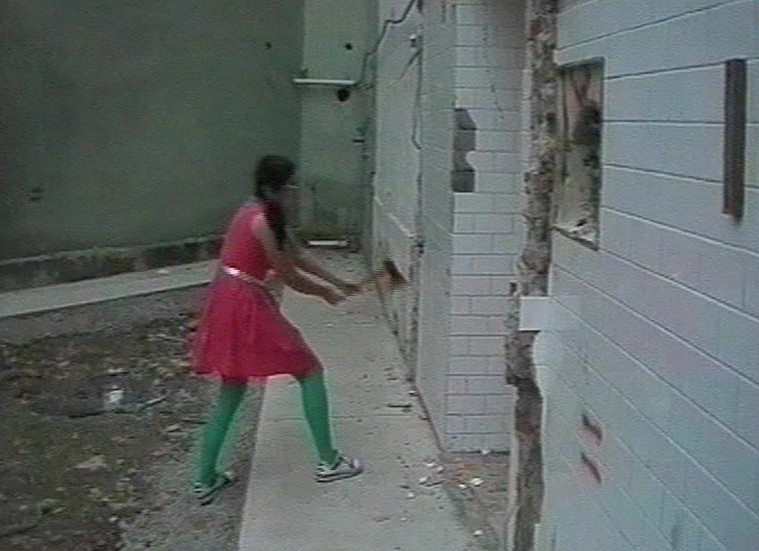 A woman washes herself with a sponge by a sink on a construction site. When she finishes washing up, she wields an axe to chip away white tiles on the wall behind the sink. 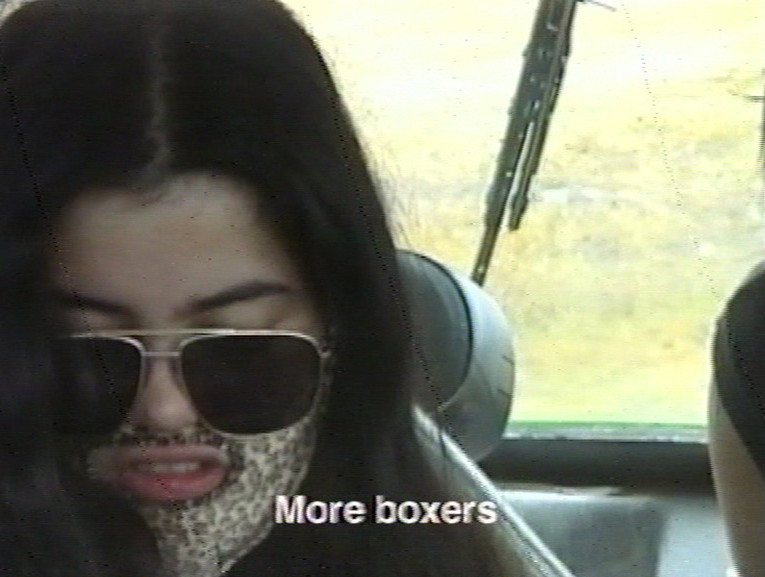 Before Pussy Riot performed in colourful ski masks, before the world sighed spring break, bitches, the 1990s saw Lady Chutney, a scenic persona by Katrina Daschner. Lady Chutney Does México is a lesbian coming out in the form of a road film with action. Three strangely dressed women donning ski masks with beards hijack a bus in the Mexican countryside and throw everyone off, except the driver. The rest is all sex, drugs and rock’n’roll. 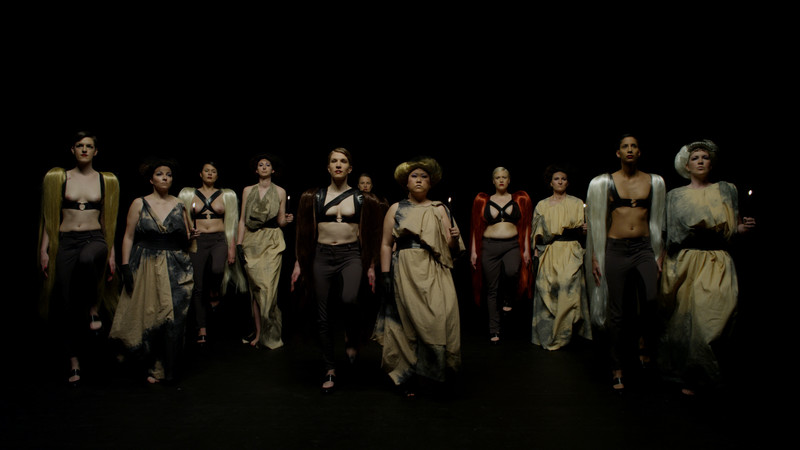 In this nonconformist silent musical, we hear the music only with our mind’s ears. Women march across Turin’s Teatro Regio stage, one group dressed in long togas, the other in horse riding hippie pants, leather bras and epaulets of colourfully dyed hair. The women link up in pairs to play in a erotic pantomime. The camera follows their motions and body contours that playfully correspond with the theatre interior. Their buttocks seem to play velveteen chairs while dripping blood becomes the crystal-draped chandelier. Or, maybe it’s classical architecture that is modelled on the proportions and curves of the woman’s body?

Katrina Daschner sings, dances, performs; her entire artistic activity is based on synchronizing her body to music and the resultant evoked meanings. Daschner, who has lived for many years in Vienna, is spiritually a riot grrrl and the essence of her performance is the female body and sexuality as a game of tension, passion and power. Associated with the LGBT community, in 2001–2002 right after receiving her diploma from the Academy of Fine Art, she, Johanna Kirsch and Stefanie Seibold established Salon Lady Chutney, an informal performative space in what used to be a hair salon. Since 2003, she has performed as part of the music-performance women’s collective SV Damenkraft (with Sabine Marte, Gini Müller and Christina Nemec), and in 2009, she founded the queer Club Burlesque Brutal, where she performs as Professor La Rose. Neo-burlesque has become extremely popular in the world over the last decade by returning to the question of whether a woman as object of desire is passive or dominant. In classic feminist writing, a female heroine as an object of interest by a male audience was considered an objectified character. In neo-burlesque, the roles reverse and the performer desired by viewers controls the situation by meting out the appropriate dose of erotic tension. Queer burlesque differs from its straight counterpart because the actors on stage and audience members differ and so does the code for gestures of desire. It seems that neo-burlesque is an interesting form of expression for Daschner also because it is the opposite of drag king performances with its theatricality, facial expressions, gestures and an arsenal of costumes that make it a manifestation of hyper femininity. The femme rules Daschner’s stage, a femme dressed in gloves, feathers, heels and with long hair. The artist nonchalantly and with a sense of humour broadcasts the motto: Lady Power Forever!