An actress was almost involved in a fatal accident during the filming of Dream. […] If I hadn’t quickly jumped on that ladder and untied the rope… I totally lost it for a while and cried without anyone knowing. That moment, which I never want to recall, made me look back on the 15 films I frantically made during my 13-year film career. Completely authorial, non-compromising confession of one of the leading artistic cinema directors. After this accident, Kim spends two years in voluntary exile, living in a hut with no heating located in the Korean countryside. Remaining in a state of dialogue with the on-screen self and his own shadow, he analyses the sources of his works and underlying emotions and complexes. The form is suspended between self-flagellation and narcissism. During the breaks taken from watching old films, paintings and posters, he does some DIY, constructing a coffee machine and a gun which he uses to settle all the matters with the characters from the past. The title song performed in a traditional way and accompanying the moments of melancholy becomes a moving refrain. During the culmination point, Kim not so much sings as wheezes through tears: Arirang, Arirang, Arariyo / Arirang Pass is the long road you go. 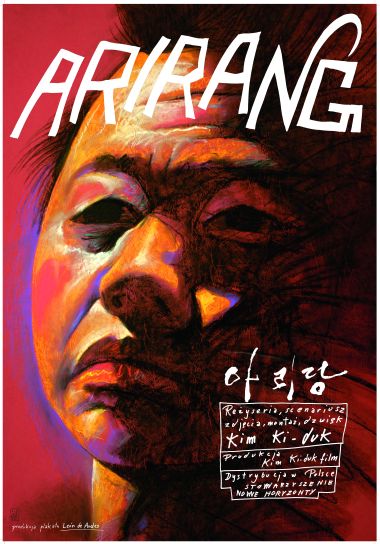 He was born in 1960 in Bonghwa, studied film in Paris and then moved back to Korea to start on low-budget films about outcasts, sadomasochist relationships, and unhealed wounds of history. His films reverberated widely thanks to a peculiar combination of cruelty and poetry; they were shown at competitions at the leading festivals, such as: Cannes, Venice (Best Director), Berlin (Silver Bear), Locarno (Don Quixote) and many others. He referred both to Buddhism and Christian ethics in an interesting way; he tackled controversial topics, such as sex change and voluntary prostitution. After a series of outstanding films from 2000–2004, he turned to an often too far reaching symbolism; currently, he is going back to his roots in a spectacular manner.