New visual identity and details about the combined 20. NH IFF and 11. AFF

Bold, uncompromising, stereotype-busting, while also offering encouragement and hope for a better tomorrow: the films shown at the New Horizons International Film Festival and the American Film Festival have always proved that film has something more to offer as an art. This year, we look to the near future, which is why the swallow is the symbol of the combined festivals: it symbolizes freedom, openness, exploration and, above all, hope. Joanna Górska and Jerzy Skakun of the Homework studio, a long-term partner of the New Horizons Association, designed the visual identification. 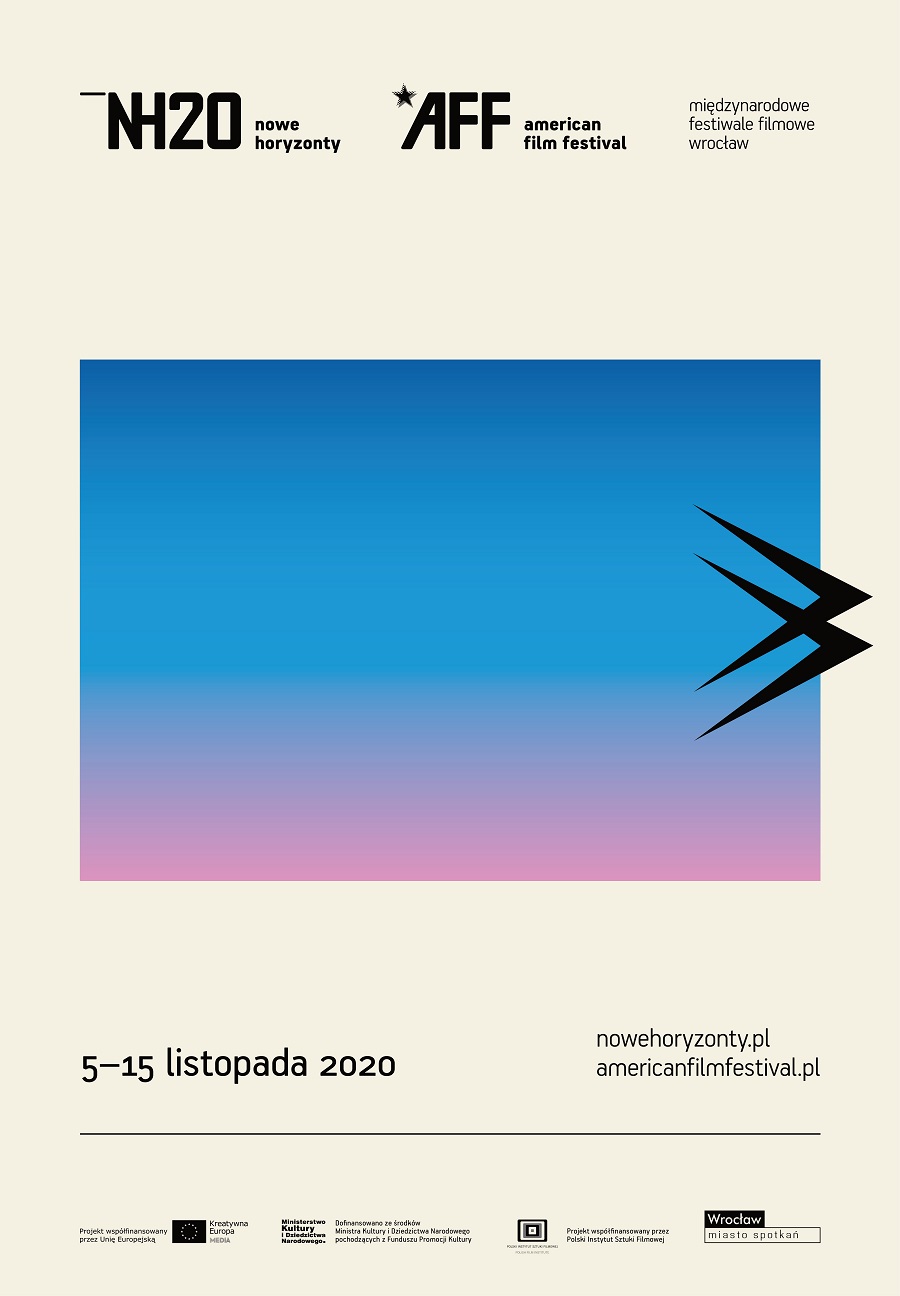 This year's edition of the New Horizons International Film Festival will be uniquely combined with the American Film Festival - we invite you to Wrocław on November 5-15 for the 20th NH and the 11th AFF. Below you will find the latest information on the combined events.

The heart of the event is always the New Horizons Cinema in Wrocław (in compliance with all guidelines from the Main Sanitary Inspectorate). This year, however, NH and AFF will take on a hybrid form: some of the films will be available online using the special New Horizons platform. Approximately 50% of all festival films - most of them titles that will not be distributed in Poland later, will be on view in this manner.

The platform will be available to pass holders as well as anyone purchasing tickets to select screenings only. We will present more details on the functioning of the platform in October.

There will certainly be the permanent sections of NH: New Horizons International Competition, Visual Front, Discoveries, Masters, Gala Screenings, Ale Kino+, Lost Lost Lost, Shortlist, Cinema Classics, Midnight Madness, Third Eye, Season and AFF sections: Highlights, the Spectrum competitions, American Docs and Festival Favorites. The New Horizons retrospectives of films by Chantal Akerman, Apichatpong Weerasethakul and Angela Schanelec will be carried over to next year. As usual, the NH / AFF program will feature the most important films from world festivals - Sundance, Berlinale, Rotterdam, Venice, as well as those selected by programmers from the Cannes Label.

Do I have to buy two passes - separately for New Horizons and the American Film Festival?

There will be one ticket for the combined festivals, priced at PLN 390 (or PLN 375 for New Horizons Cinema Friends Club Card members). Those who have already purchased a pass do not need to synchronize or update their pass or purchase in any way. However, due to the new sanitary guidelines, the pool of available seats at the Nowe Horyzonty Cinema will be reduced, and thus the number of available tickets will be smaller, so we encourage you to make your purchase as soon as possible.

Important! Passes are available only online - at www.nowehoryzonty.pl

When will the program be announced?

The joint festival program will be announced on October 20, and ticket sales will start on October 22.

How will the pass holders be able to use the online platform?

All pass holders will receive 11 "tickets" to the online screenings - which means that each day they will be able to watch an additional movie from the online repertoire. The number of films (and access to them) on the online platform will be limited: not all films shown in the theater will be made available online.

How can I use the festival voucher?

Vouchers can be activated (exchanged for a pass) on the festival website through October 16, 2020. However, if the new date of this year's festival is not convenient for you, you can also return the voucher or transfer its validity to next year's NH festival. In this case, please contact our sales department: sprzedaz@nowehoryzonty.pl

Where and when can I pick up my pass?

The festival pass (including passes purchased using a voucher) can only be picked up by the person whose name appears on the pass, beginning November 4, 2020 through November 15, 2020 (between 9:00 AM - 9:00 PM), at the Festival Center at the New Horizons Cinema (ul. Kazimierza Wielkiego 19a-21, Wrocław) upon presentation of an identity card or other photo ID.

Summer without New Horizons is no summer at all. What festival attractions will take place prior to November?

You will be able to feel the festival atmosphere during the New Horizons Tournée in several cities throughout Poland, beginning next Thursday, July 23. The repertoire will include films that perfectly fit the idea of the festival and reflect its unmistakable energy: Bait, dir. Mark Jenkin - winner of best film at the 19th New Horizons, Ema, dir. Pablo Larraín - a new work of the Chilean cinema master, starring Gael García Bernal, and Liberté, dir. Albert Serra - the most eccentric film from last year's NH. Meanwhile, on July 31 at 8:00 PM, along with Gutek Film, we invite you to the New Horizons Cinema for the Polish premiere of Charlatan - the latest film by Agnieszka Holland.